Chapter 1 of The Devil You Know

“Can you smell that?”

“I can’t smell a thing with this miserable cold,” came the muffled reply from behind his left shoulder. “Honestly, Henry. How can you live in this state? It’s too cold, too wet, and it snows too much.”

Henry glanced back at his mother. She was huddled inside her ankle-length fox fur coat, something he was fairly certain the PETA people would not appreciate, a matching hat on her head, and leather gloves covering her hands. The only actual part of her he could see were her eyes and cheekbones. He supposed that explained why he could barely hear her. She hadn’t even stepped foot off the beach, preferring to keep her feet firmly planted on the ground rather than on the “questionable workmanship”–her words, not his–of the boat dock that overlooked Sequim Bay at the back of his house. The dock had been there longer than he had been alive and was probably just as sturdy today as it had been the day it was built. He seriously doubted the workmanship was in question, no matter what his mother thought.

“Mom, you were born and raised in New York. It is colder, wetter, and snowier there than it is here in Washington. Besides, the weather has been a bit more brutal this winter than usual.”

“Would you like me to call my French chef to come over and make you some hot tea and honey?”

She brightened at that. “You have a French chef?” The excitement in her voice made him smile and he almost felt bad about messing with her. Almost.

Her glare was hot enough to burn. “I cannot believe you just lied to your mother.”

Apparently not as far as she was concerned.

“You’re as bad as your father.”

“Dad lies to you?” That was surprising.

“Not if he knows what’s good for him.”

He chuckled, then wisely decided to change the subject.  “You really can’t smell that?” 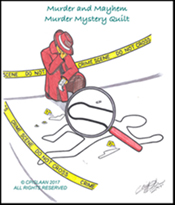